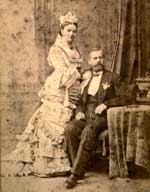 Johann Friedrich Julius Sandtmann was born 2th May 1826 in Dargun, a small town in North Germany, in the Dukedom of Mecklenburg. He grew up in Hamburg and attended a grammar school there. He later become a successful independent businessman in Hamburg, mainly importing tobacco. In 1881 he was elected the Deutsche Fortschrittspartei (German Progressive Party) candidate in the Reichstag (German parliament) election. He was also a member of the Hamburg Bugerschaft (city council).

He was married to Ernestine Sandrock and they had five daughters and three sons. She died some time before he did.

At some point the eldest son, Fritz, took over some of the family business but got into trouble speculating in South American mining shares. His father had to bail him out by liquidating his own business. At the time there had also been a poor tobacco harvest and the business tariffs had become very high so no doubt times were very tough.

His funeral was held on Monday 16th April 1883 and an obituary in the Hamburger Frembenblatt newspaper gives an amazing account of the service.

The funeral of Julius Sandtmann yesterday proved to be memorial service in honor of the late patriot which was as dignified as it was impressive. Long before 10 o’clock in the morning, the hour fixed for the ceremony, a huge procession was in progress to the house… It need hardly be mentioned that the shape of the coffin was barely recognisable, covered it was with flowers and wreaths… The assembly deeply moved, we saw many a tear being suppressed in the eyes of strong men – watched the carriers do there duty. They took up their precious burden and in close procession there followed on foot three thousand men of all classes whilst seventy carriages accompanied the departed. A dense multitude formed on both sides of the street as the cortege made its way through… At 12 o’clock the head of head procession reached the gates of St Gertrude’s cemetary and the coffin was accompnied to its grave by the singers of the Cultural Society of Workmen… The eyes of his friends followed the coffin as it sank into the grave and they covered it with a last handful of earth. Hamburg has honoured one of its best citizens from the fulness of its heart. May the city of our fathers never lack from such noble and selfless sons.