In a letter to the Hawke’s Bay Herald, August 1914, Julius Sandtmann said:

I have come from fighting stock and since 1735 my family furnished a number of men for active service. My grandfather and two of his brothers fought against Napoleon (1812-1815) with the German Legion under Wellington on the Peninsula, and one of them subsequently in the Greek War of Independence (1821-1829). He was killed at the Battle of Arba (21st July 1882). Another was a Lieutenant in the Hanseatic Regiment and was severely wounded at Waterloo. Another went through the Second Schleswig War, 1864, and the Austro-Prussian War, 1866, as regimental surgeon, and four cousins fought in the France-German War of 1870.

Julius Sandtmann served with the Duke of Oldenburg’s Blue Dragoons and at one time was a member of the body guard of Empress Augusta (wife of William I). 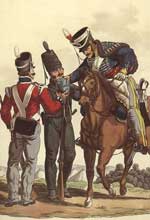 The formation of the King’s German Legion happened after the occupation of Hanover by the French in 1803. Originally made up of German volunteers it became one of the most heroic and distinguished Allied units in the Napoleonic Wars. The Legion joined Wellington’s war in the Peninsula and it earned a reputation as the crack troops of the army. The Legion represented about 20% of Wellington’s fighting strength and distinguished itself in all the major actions, including their famous charge at Garcia Hernandez during the Salamanca campaign. The King’s German Legion was a mini-army in its own right, comprising infantry, cavalry and artillery. The Legion was disbanded in 1816 and several of the units were incorporated into the army of the Kingdom of Hanover.

The Peninsular War occurred during the Napoleonic Wars between France and the allied powers of Spain, the United Kingdom, and Portugal for control of the Iberian Peninsula. In 1806 Napoleon declared the Continental Blockade, forbidding British imports into continental Europe. But Portugal, a neutral country, had tried to avoid this. Between 1807 and 1808 Napoleon’s army invaded Portugal and Spain. Napoleon used the Treaty of Fontainebleau, signed between Spain and France, to reinforce the Franco-Spanish army occupying Portugal. In June 1808 a popular uprising against the French broke out in Portugal and Spain encouraging the British to commit forces to remove the French army. In August 1808, British forces (including the King’s German Legion) landed in Portugal under the command of Lieutenant-General Sir Arthur Wellesley, the future Duke of Wellington.

Over the next few years the opposing forces faught it out. On 22nd July 22 the French suffered a damaging defeat at the Battle of Salamanca. On 6th August, as the French army regrouped, the Anglo–Portuguese army entered Madrid. French hopes of recovery were stricken when Napoleon took 30,000 soldiers from the Peninsular campaign to help in the disastrous invasion of Russia in 1812. Starved of reinforcements the French position in Spain became increasingly unsustainable as the allies renewed the offensive in May 1813. The allies continued to chased the retreating French, reaching the Pyrenees in early July 1813. On 11th December Napoleon agreed to peace with Spain under the Treaty of Valençay. However fighting continued until 14th April 1814, after Napoleon had abdicated.

In 1813 Napoleon was forced to abdicated to the island of Elba. Less than a year later, he had escaped and returned to power. Many of European states that had opposed him began to mobilise armies. Two large allied forces, consisting of an Anglo-Allied army under the command of the Duke of Wellington and a Prussian army under the command of Gebhard von Blücher, assembled close to the northeastern border of France. Napoleon chose to attack the allied forces in the hope of destroying them before they could join in a coordinated invasion of France. The decisive engagement of this three-day campaign (16 June – 19 June 1815) occurred at the Battle of Waterloo (Sunday 18 June).

The Prussian army consisted of 48,000 men, including Landwehr (militia) regiments, cavalry and artillery.

Greece was under the rule of the Ottoman Empire since the 1300’s. In 1814, a secret organization called the Filiki Eteria (“Friendly Brotherhood”) was founded with the aim of liberating Greece from the Ottomans. On 17th March, 1821, war was declared on the Turks by the Maniots, Greek inhabitants of the southern Peloponnese, and a civil war ensued. Following years of negotiation by European powers, Russia, the United Kingdom and France, decided to intervene in the conflict. In 1822 the King’s German Legion was sent to Greece to help in the fight against the Ottomans. The Greek cause, however, was saved by the intervention of the European powers. Favouring the formation of an autonomous Greek state, they offered to mediate between the Turks and the Greeks (1826 and 1827). When the Turks refused European pressure they sent their naval fleets to Navarino, where, on 20th October, 1827, they destroyed the Ottoman fleet. A settlement was finally agreed on 3 February, 1830 an Greece was declared an independent state. 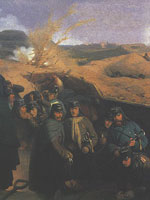 The Second Schleswig War began on 1st February 1864 when Prussian forces crossed the border into Schleswig, Denmark. The areas of Holstein and Schleswig, areas bordering Germany and Denmark, had a large German speaking population which wanted to be ruled by the German Confederation. Denmark suppressed the secessionist movement in the First Schleswig War (1848–51) but the movement continued throughout the 1860’s as Denmark attempted to integrate the Schleswig into the Danish kingdom. To add to the tension Denmark started charging tolls on shipping passing through the Danish Straits. To avoid this Prussia planned to build the Kiel Canal, which could not be built as long as Denmark ruled Holstein. In 1849 the Constitution of Denmark was adopted and on 18th November 1863 the king of Denmark signed the so-called “November constitution” establishing a common parliament for both Schleswig and Denmark. This was seen by the German Confederation as a violation of the 1852 London Protocol, in which the Danish government agreed that the two regions would remain autonomous. On 16th January 1864 Bismarck issued an ultimatum to Denmark demanding that the “November constitution” should be abolished within 48 hours, which was rejected by the Danish government. On 1 February Prussian and Austrian troops crossed into Schleswig and the war began. On the 12th May a conference in London between the two parties led to a ceasefire, which was soon broken as they could not agree on how the borders should be drawn up. By 14th July the Prussian army had reached the north tip of Jutland and occupied most of the Danish mainland. Fearing further losses the Danish government had to accept armistice and peace negotiations. On 30th October 1864, the Treaty of Vienna was signed and Denmark ceded Schleswig, Holstein and Lauenburg to Prussia and Austria. 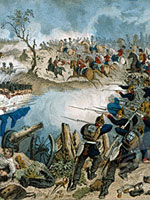 The Austro-Prussian War was fought between Prussia, allied with Italy, and Austria, allied with several smaller German states. The conflict started with a dispute between Prussia and Austria over the administration of the Schleswig-Holstein region and was deliberately provoked by Bismarck, who wanted to expel Austria from the German Confederation as a step toward the unification of Germany under Prussian dominance. The matter was bought before the German government who responded by voting for a partial mobilization against Prussia. Furious at this Bismarck declared that Prussia was withdrawing from the German Confederation. At the time Prussia’s army was far superior to any in Europe and it overran the German states allied with Austria. On 23rd August the Treaty of Prague was signed and the war ended. Prussia annexed Hanover, Hesse, Nassau, and Frankfurt, as well as Schleswig-Holstein and formed the Prussian-led North German Confederation. In 1871 this led to the establishment of the German Empire. 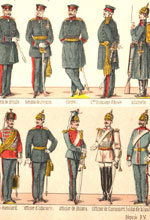 The war between France and the Kingdom of Prussia was a culmination of years of tension between the two nations over the issue of who was going to take over the vacant Spanish throne. With the release of the Ems Dispatch, which was an internal message from the Prussian King to Bismarck about the demands made by the French ambassador, public opinion on both sides became inflamed. On 19th July France declared war on Prussia. Other German states quickly joined in on Prussia’s side. Prussian and German armies were far superior to that of the French. At the Battle of Sedan, 2nd September, the Prussian army captured nearly the whole army of Napoleon III, some 21,000 soldiers. Over a five-month campaign the Prussian army defeated the French army in a series of battles fought across northern France and following a prolonged siege captured Paris on 28th January 1871. Ten days later Germany was united under King Wilhelm I of Prussia.

Unfortunately I haven’t been able to find out anything about the Battle of Arba. The only major conflict at that time was the Second Anglo-Egyptian War between between Urabi Forces and British Forces.