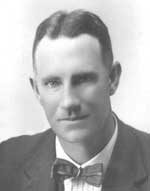 Roy Stock was born in March 1900 and went to Caterham School in Surrey from 1911 to 1917. In October 1917 left to go to the Royal Naval College at Greenwich to start his training as a pilot. His brother Ewart and had joined the RNAS a few months before.

He served with the RNAS, and later the RAF, until 11th November 1919. An account of the time he spent in the RNAS can be found here…

After being demobbed he tried his hand at farming but nothing seem to suit. At that time emmigration to Canada, South Africa, Australia and New Zealand was popular as it was hard to get work in Britain. His family had connections to New Zealand through a family friend, Julius Winfred Sandtmann, who his father had meant in 1913 while on a skiing holiday in St Moritz.

In 1913 Ernest Ellot Stock and his brother Ralph went on a skiing holiday to St Moritz. One afternoon Winfred Sandtmann was reading a magazine article in the lounge. When he had finished Ralph introduced himself and said he was the author. The three men chummed up and they spent a bit on time together. Frieda and Winfred had been on a trip to Europe and gone to St Moritz from Germany to do a bit of sightseeing. At the end of their stay Grandpa and Ralph went back to the UK and the Sandtmann’s back to Germany with the invitation to come and see them when they got to England before getting the ship back to New Zealand. War broke out in 1914 and Frieda and Winfred just made it out of Germany on one of the last trains. Had they not got out they would have probably been interned.

In 1926, aged 26, Roy Stock arrived in Napier. He worked on a few farms in Hawkes Bay, including Clarienet Station, Waipawa and for a family called Gilbertson, who farmed near Rissington. On 12th March 1930 he married Gylda Sandtmann in the St John’s Cathedral, Napier. During the same year they bought a farm at Mungatuna, a few miles north of Tolaga Bay. The farm was situated where the river doubled back on itself forming a “U” and was prone to flooding. There were about 30 dairy cows, some chickens and pigs. Their main income was from selling milk and cream. During this time New Zealand was going through a depression and the price of butter fat dropped from 9 pence to 6 pence which meant they could no longer live off what they made from milk and cream. Also during this period the farm suffered a number of floods, the last of which destroyed most of the farm. An account of what life was like on the farm can be found here…

In 1939 the family moved to Napier. First staying with Gylda’s mother and then moving to their own house at 2 Seapoint Road. Roy Stock got a labouring job on the wharf where they were building the break water to form the harbour. In 1940 they moved to 2 Thompson Road where Ronwen was born.

In 1940 Roy Stock joined the army, at first based in Napier but later moving to the Army Headquarters in Wellington where he spent the rest of the war. He was too old for active service by then being over 40. His main duty was to design camoflague patterns for the Pacific Theatre. The family remained in Napier visiting him when he was on leave. After he was demobbed in 1945 the family moved to Wellington.

In 1947 Roy got a job as an Art Editor for the Journal of Agriculture – a magazine published by the New Zealand government. While the family was living on the Mungatuna farm Roy had taken a corespondence school course in commercial illustration – he had won a competition to fund the course. At the time he also did illustrations for educational publications. Some of Roy’s watercolours can be found here… 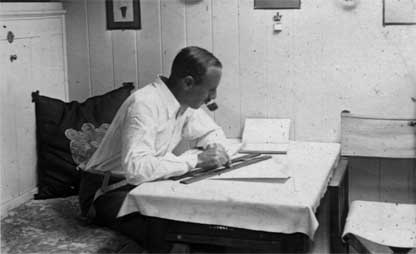