Condemned Sector formed in early 1980 when school friends Richard Watts and James Gilberd decided it would be great to form a band playing their own songs. Both had been in a college band called ‘The Vultures’ while at Onslow College.

We didn’t go out to form a punk band it was the type of music that we could play and what was cool at that time. Onslow College was quite a liberal school and I used to go to school wearing an old suit jacket covered in badges and zips. I used to get a bit of hassle from some of the older teachers but the headmaster was a musician of some kind and was quite interested in the band – he even came along to one of our band practices. 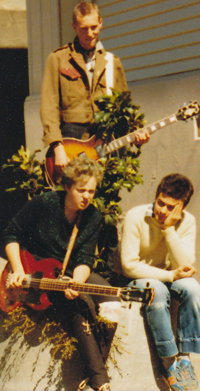 In September 1980 Caroline Forsyth joined as lead vocalist. She was Richard’s girlfriend at the time but left a few months later when they stopped seeing each other. Caroline sung for Condemned Sector at the infamous ‘Battle of the Sounds’ competition in October 1980. Radio DJ Phil O’Brien was a judge for the competition and got a lot of ‘stick’ from various people because of his comments about some of the ‘less-established’ bands taking part.

They weren’t given a sound check and played mostly in the dark as they wouldn’t turn all the stage lights on. The Reds, who were made up of former Ambitious Vegetables, also played. Peter Henderson, The Reds guitarist, got pretty vocal about the whole event.

Nigel Elder (lead guitar, vocals) joined early 1981. He had come along to a few of their gigs at the Last Resort and liked what they played.

Nigel was a far better guitarist than I was and having him in the band added to our sound and also meant that I could concentrate on the singing.

At the time there weren’t many places in Wellington for bands to play. One great venue was Billy the Club which was a venue off Vivian Street – in the middle of Wellington’s red light district. It was also called the Rock Theatre at one point. Condemned Sector only played there a couple of times before it shut down.

Condemned Sector also used to play at the Last Resort in Courtney Place. The venue was owned by lawyer Sue Barlow and was originally a health food cafe. Sue turned it into a great venue for young bands to play in.

The only recordings Condemned Sector did were at Sausage Studios, which was above a shop somewhere near the parliament buildings.

It was all very ‘home-made’ and they only had a four-track so you had to keep mixing things down all the time before adding other parts. They had separate rooms for recording each instrument and egg cartons and carpet all over the walls.

Cassette tapes of the recordings were sold through local music shops and friends.

In April 1981 Jenny decided to leave Condemned Sector and the band evolved into the Neoteric Tribesmen.

Battle of the Sounds
October 1980, Radio DJ Phil O’Brien was a judge. 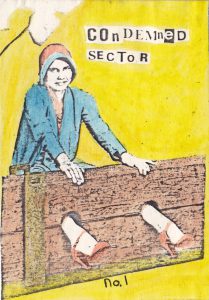