Danse With A Stranger

Made up of ex-members of the Resurrectionists and Unrestful Movements, Danse with a Stranger had a unique sound due to their limited line-up. The band spent nearly a year developing their musical style before deciding to play to an audience.

On the 27th and 28th September 1984 they played their only concert at the Terminus Tavern.

So what do they sound like? A very good question. Basically a lot of things but the main element that emerges is a positiveness. The drumming is gutsy with a lot of punch – tribal at times. And with a modulated bass there’s a wide range of latitude which reverberates and rebounds on itself. At times it’s a slightly raw sound having a brashness which intentionally doesn’t soothe but demands your attention. Sort of “music to box by”. Overall there’s energy, which threatens sometimes to burst into disorder but is undercut by theatrical screaming and very human wailing.

A month or two after their Terminus concert Garth decided to leave the Danse with a Strange and the remaining members went their separate ways. 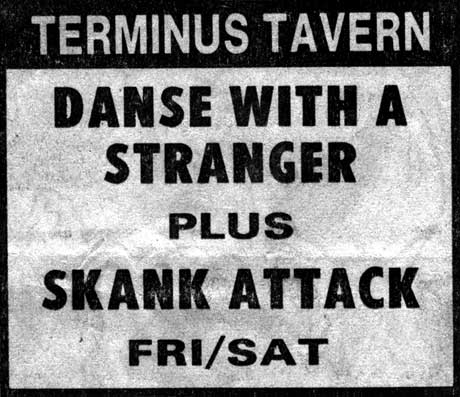