Richard Watts joined Flesh D-Vice as their bass player in 1982 after leaving the Neoteric Tribesmen. Flesh D-Vice were part of the new punk ‘Oi’ scene in Wellington and played a mixture of hardcore punk and metal. The band had both a punk and skinhead following.

Richard left in 1983 just after the release of the ’12 Inches of Hard Flesh’ LP.

I remember going up to Auckland to play a concert with some local punk bands. There was quite a group of hangers-on that came with us. We hired a mini-bus and spend most of the journey drinking and causing mayhem. Eugene had a court appearance so was going to fly up the next day but unfortunately he missed the flight so we couldn’t play. We stayed at someone flat in the middle of suburbia. The neighbours complained about the noise and called the police who told us to leave town or get arrested. We ended up at the concert anyway and unbeknown to us the Auckland skins had been planning a big brawl with us. So there was a massive fight at the concert and we all came back with black eyes – including my girlfriend.

Once we played at Charlies Strip Club in Cuba Street. There was a stage for the girls to perform on and we played on that. Towards the end of the gig a group of Taiwanese fishermen turned up looking a little bemused. They were obviously looking for a different type of entertainment.

Flesh D-Vice split in the early 1990’s and Gerald Dwyer went on to become the manager of Shihad and HLAH. Gerald died in 1996 of a heart attack. 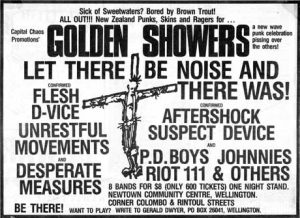 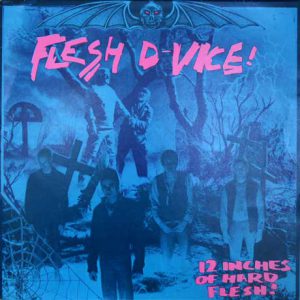