Ga Ga included former members of the Resurrectionists and Spader Non. Their first gig was at the Battle of the Bands competition in October 1987. They also played a gig at the Cricketers Tavern.

In November 1987 Richard left New Zealand to join his parents in the UK and the band split. 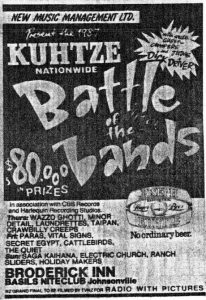