After Jenny Whyte left Condemned Sector in April 1981 the remaining members decided to carry on as a three piece but changing their name to Neoteric Tribesmen. Richard switched from guitar to bass.

With only one guitar their sound naturally changed. Their musical direction also changed as they started to be influenced by ‘New Wave’ bands like The Cure, Echo & the Bunnymen, Killing Joke etc. Nigel also started doing more song writing and singing.

It was a great time to be in a band as there were lots of venues opening up around Wellington – Terminus Tavern, Aro Street Community Centre, Victoria University, Wellington Polytechnic etc. There were also a few international bands venturing out to NZ around that time – The Cure, Talking Heads, The Ramones. There was also a bit of a change in the ‘scene’ in New Zealand at this time. A lot of punks started to wear DM boots and braces and calling themselves Bootboys. Richard was the only one in the Neoteric Tribesmen that became a bootboy though Nigel also used to wear boots.

One of the venues around Wellington that bands could play at was The Beware House, which was an old warehouse that was used as a venue for private parties. The Terminus Tavern was also another great venue as it allowed bands to take a reasonable percentage of the door takings, though bands had to hire their own PA and have someone on the door. The Terminus Tavern turned into one of Wellington’s long-standing band venues.

Neoteric Tribesmen also played a couple of times in Masterton with local bands like Cumulus Haemorrage. Nigel came from the Masterton area so the band used to stay with his parents. In December 1981 they played an outdoor concert at the Masterton Sports Bowl.

It was a bit surreal as it was a big place and only a few people turned up. It was a very hot day and there wasn’t any cover on the stage so we all got sun burnt.

They also played at a Community Hall in Masterton but had to cut the concert short as the Black Power turned up and started threatening everyone.

It was a bit like a Benny Hill skit with us packing the van up as quickly as we could and then racing down the road, doors flying open, with the Black Power following.

The Neoteric Tribesmen recorded two sessions at Sausage Studios. One in July 1981 and the other in September 1981. Both sessions were released on a cassette tape and sold through a number of record shops and by mail order. 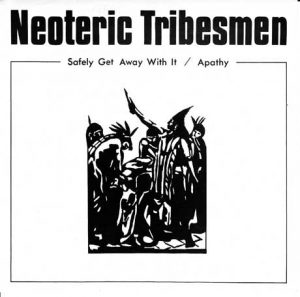 In 1982 they went into Crescendo Studios, which was a professional 24-track recording studio, and recorded ‘Safely Get Away With It’ and ‘Apathy’. Their plan was to find a record company to release it but in the end the band paid for the pressing of the records themselves. The single was mainly sold through local record shops. They also tried to get on the Radio with Pictures TV show but were rejected as the producer felt that the song had an offensive word on it (shit). The Neoteric Tribesmen also tried to play at the Sweetwaters Music Festival, which was a big outdoor music festival, but unfortunately got rejected.

In August 1981 English band The Cure played a concert in Wellington and the Neoteric Tribesmen were invited to the after concert party at the flat of local journalist (and Domestic Blitz frontman), David Maclennan. Early in the morning the whole party moved to the Neoteric Tribesmen’s practice room at Clyde Quay School for an impromptu jam session.

It was amazing to be able to meet a band that influenced our sound so much. They were great people.

At the end of 1982 tension grew between Nigel and Richard. The music scene in Wellington had changed and there was a lot more violence occurring at concerts (mainly caused by the Bootboys) so a lot of venues were closing down. The band had a bit of a bootboy following which started causing a problem when finding venues to play in. Nigel also wanted their musical direction to change to more mainstream and Richard was becoming more and more involved in the bootboy scene. At the end of 1982 Richard left the Neoteric Tribesmen and joined Flesh D-Vice. 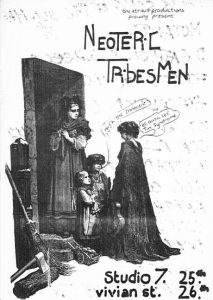 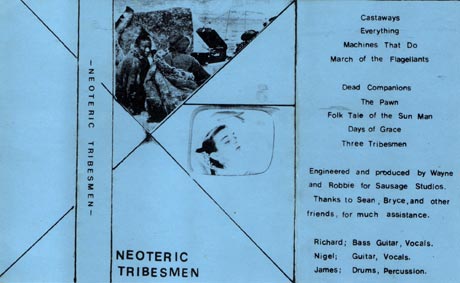 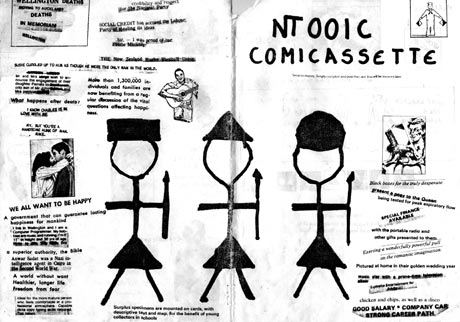 Tape: side 1 (recorded July 1981, Sausage Studios):
Castaway
Everything
Machines that Do
March of the Flagellents

Single (recorded 1982, Crescendo Studios):
Safely Get Away With It
Apathy