The Resurrectionists were formed in September 1983 by Nigel Elder and Michael Musgrove, who enlisted former Neoteric Tribesmen James Gilberd and Richard Watts to complete the line-up. The name came from a Dylan Thomas work called the ‘The Devil and the Doctor’.

The Resurrectionists sound was an evolution of the Neoteric Tribesmen with a bit of funk thrown in. The addition of a lead vocalist meant the majority of the song writing being shared between three members. The stage performance also changed and became a little more theatrical with some gothic elements.

Mike walks on stage and starts whacking on a drum. Then I appear with this bugle and go toodle-oodle and make a lot of noise. The others come on and it develops into a song with chants in it. The audience look like they are thinking what the hell is this. Then we suddenly go into our dancier songs. TOM, Wellington Arts and Entertainment magazine, April 1984

In March 1984 Steve Roache joined the band on trumpet. The band started to get more and more gigs and built up a reasonable fan base. In July 1984 they played at the semi-finals of the ‘Band of The Year’ competition but unfortunately didn’t get through to the finals.

In September 1984 the Resurrectionists decided to call it a day due to ‘musical differences’. The band performed a break-up concert at the Clyde Quay Tavern on the 22nd September and enlisted a number of friends (including Erica Roberts, The Unrestful Movements vocalist) to enhance their line-up.

Members of the Resurrectionists went on to form Danse with a Strange, Spader Non and also two jazz combos; The Scat Cats and The Corgettes

On Friday 29th August 1986 the Resurrectionists played a one-off concert at the Electric Ballroom. The concert was called ‘Closer to the Source’ and included a film show and the Urban Dwellers as support band.

Not sure who came up with the idea of reforming to play a one-off concert but we all seemed to be in-between bands and at a bit of a lose end. It was great to be able to play all those songs again. We all had improved as musicians so our sound was much more professional sounding. We even played an old Neoteric Tribesmen song (Folk Tale of the Sun Man).

After the ‘Closer to the Source’ Richard, Michael, Steve and James went on to form Ga Ga along with Peter Jamieson on keyboards. 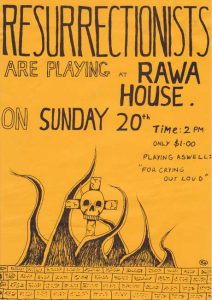 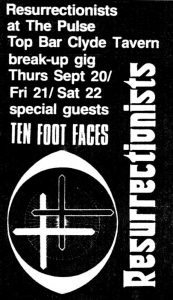 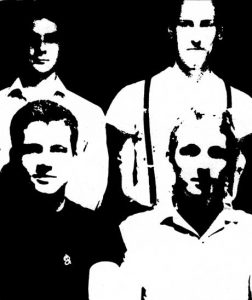 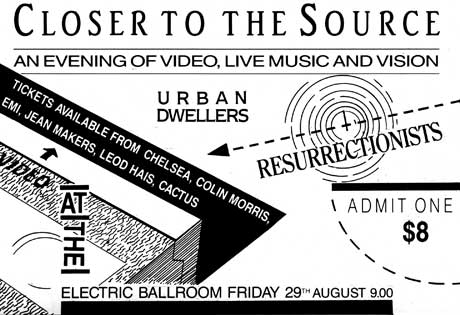 Tape 4 (Closer to the Source, Live at Electric Ballroom 29th August 1986):
Dead Companions
Crusade
Into the Flow
Direction
The Hand
Fall Inside
Shaking You Down
Folk Tale of the Sun Man
Broadway
Possess